10 Interesting Facts About The Holi Festival

Are you familiar with the festival of Holi? It’s a colorful Hindu festival that people celebrate across the world to welcome the spring season. Partiers throw colors at each other, and neighbors feast together on delectable dishes, all in the name of the new season.

The celebration marks the end of winter and heralds the beginning of spring. Families and neighbors gather on the streets and throw liquid dye and powdered color at each other and sing. Holi is a joyous festival of color by Hindus around the world.

Check these 10 fun facts about the festival of Holi and its historical origin. 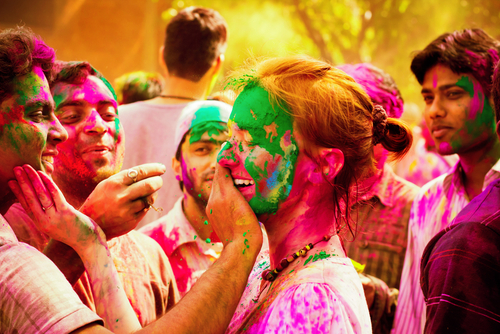 The festival has a number of mythical stories. The most well known and generally accepted is the story of Prahlad. Based on a legend, the evil king, Hiranyakashyap prohibited his son Prahlad from idolizing Vishnu, the Hindu god. In resistance to his father, Prahlad persisted in his worship of Vishnu.

Hiranyakashyap jested at his son’s prayers and regulated him to sit on a pyre (a woodpile built for body burning as part of a funeral) along with his aunt Holika, known to be insusceptible to fire. However, during the fire test, Holika burnt to death in spite of her acquired immunity.

Luckily, Prahlad survived because he sought the help of Lord Vishnu. As such, the burning of Holika is commemorated as the festival of Holi. There are other stories that also feature the celebration of the festival but most agree in the same way that good triumphs over evil.

Holi is a two-day celebration

The celebration usually lasts for 2 days. The day before the festival is called as “Jalane wali Holi” or “Holika Dahan” – the day Holika was burned to death. People celebrate it by lighting their own bonfires within the neighborhood. The following morning is known as the “Rangwali Holi” – the day of color which is the festival’s main day.

Early The main day of Holi begins early and is bolstered with colored powder, drum beats, and a series of fun activities. We usually prepare for days before the main event. A week before Holi, children start playing with water pistols and water balloons filled with color.

Did you know that Holi is the only festival where people are clad in their oldest clothes?  This is because getting the Holi color out in the laundry is an extremely difficult task. Lately, people started to wear white clothes so that the colors of Holi looks magnificent in pictures. This is especially nice in this Instagram period! 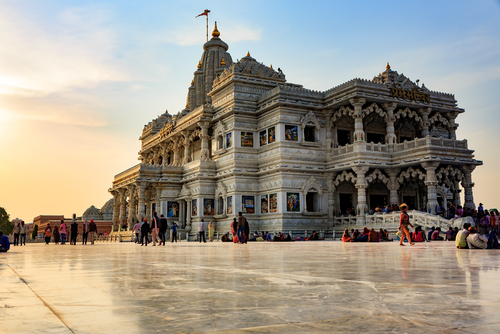 Some of the largest Holi celebrations in India are held in the temples of Vrindavan located in the northern part of India. Legend has it that Hindu god Krishna played Holi with Radha. Visitors gather to this city from different countries to dance and sing with the devotees.

The festival of Holi transpires at the end of winter and the start of spring when nature is at its full bloom. The time represents a new season and new beginnings for Hindus. It’s often a time to put an end on conflicts and cast away emotional problems.

Patterned on this bright festival, the food is specially prepared to be fun and colorful. The most popular spread is the finger foods since you can eat them even with color-smudged face and hands. The most popular dessert is Gujiya – a fried and sweetened empanada-like pastry with dried fruits and nuts as filling. 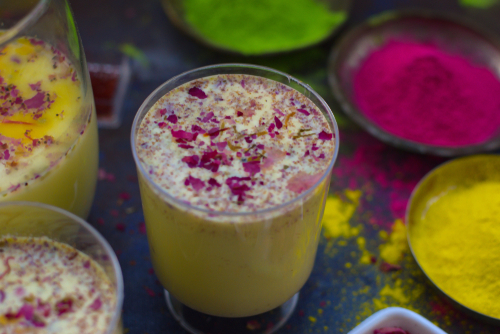 During the day celebration, refreshing cold drinks are served. One of the popular drinks is Thandai – a milky mixture of almonds, pistachios, cardamom, and cannabis. I prepare a child-friendly version of this and freeze it into popsicles for the festival.

In the past, the colors people used for the celebration were drawn from herbs and flowers and herbs. During the ’80s and ’90s, the mass production of artificial colors became widely used. Because of the toxic coloring ingredients, man injuries were reported over the years.

As such, people have become more cautious and patronize natural sources of color like turmeric, pomegranate, marigold, sunflower, and other natural herbs and flowers.

During the festival, revelers should be prepared with a sudden throwing of colors on the street. Holi etiquette signals when one throws colour at strangers you respond by saying: “Bura na mano, Holi hai!” which translates to “Please excuse me, it is the day of Holi.”

The festival of Holi is known as a vibrant and loud celebration of color. I have warm memories of it with my childhood buddies in India. In Canada, even if spring often comes to a tad late for this festival, playing with color outdoors takes on a different meaning.

Austria's Legend Of Krampus is a Christmas Favorite