When you think life has left you with nothing, and you have nowhere else to go, get some paint and a paintbrush, and start painting the pain away!

I was about to leave Aichi Prefecture and head to Momotarō Shrine, a destination merely 39 minutes away via a train ride from Nagoya station, when out of the blue, I decided to get off at Inuyama Yuen Station.

It turned out to be one of the greatest decisions of my life, as when I arrived, I was greeted by a vibrant and funky building, and I thought to myself, “Am I in rainbow land?!”   The groovy structure was designed by Tadanori Yokoo, one of the most influential artists and graphic designers on the scene after World War II. Of course, this  interesting place intrigued and I just had to investigate. My mind was just blown after having an amazing experience at an eccentric and artsy karaoke bar called The Million Dollar Café. 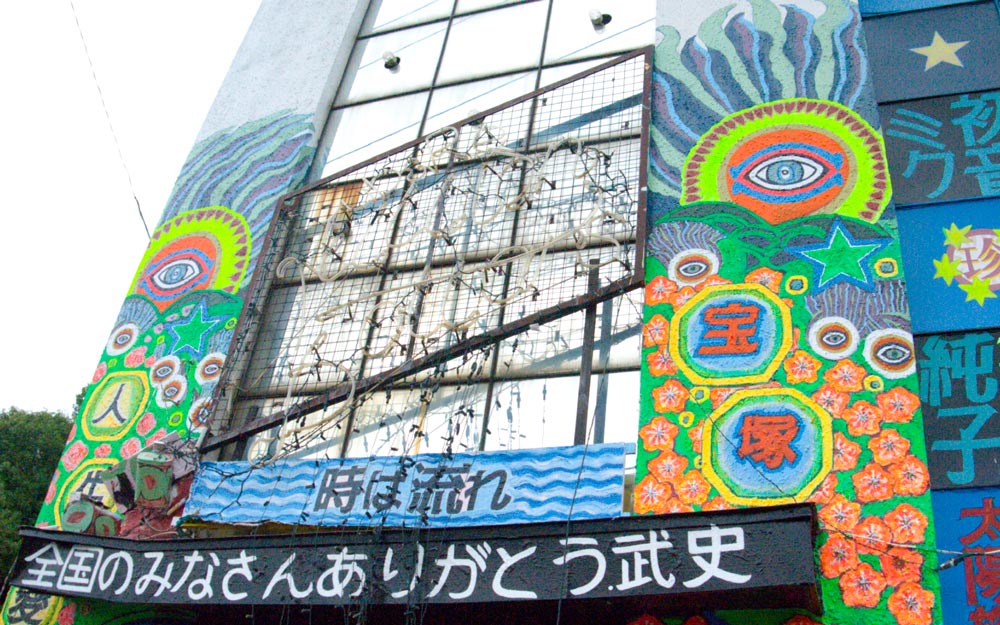 Okay, so, to be honest, I was kind of iffy to go inside at first, as I did not know what I could expect from this bizarre nook. However, when I saw the sign that said 営業中 (えいぎょうちゅう), meaning open, that was my cue to man up and come in.

For a brief moment, I thought that I would most probably just see an ordinary café, but boy, was I so incredibly wrong. So I took off my shoes, as is customary to any Japanese establishment, and was in awe of all the images and beautiful paintings that filled the entire room. Among these works of art were portraits of famous people, and replicas of Johannes Vermeer’s Girl with a Pearl Earring and Edvard Munch’s The Scream.

I stood there for a while, taking all the wonders the place had to offer in, when I was cheerfully greeted by Osawa Takeshi (大沢武史), the gracious owner of the café.   Osawa was very accommodating and shared with me his journey of creating his store. He was born in 1941, and established the café at a young age of 25, back in 1967. It celebrates its 52nd anniversary this year! Very impressive!

The store started out as an eel shop. Back in the ‘60s, not many supermarkets offered eel, so his business was doing quite well. Soon after, he transformed his simple eel store into a more ambitious café and pub. The business was so successful that he even once put up a second branch, which he eventually had to give up because he could not manage two stores by himself.

For quite some time, the Million Dollar Café was just a simple store that served coffee. At one point, he received a thank you note from the Ueshima Coffee Company (UCC) for their coffee products. From here, many other milestones unfolded. What better way to tell this interesting story than by hearing (or in this case, reading) it from Osawa, himself.

“When I was forty, I met a girl named Junko. Junko was eighteen and worked part-time at my café. I had a wife before her, but Junko became my common-law partner. Business was going really well. I made good money. When I was fifty-six, Junko and I had a baby boy named Yuki.” This was how the transformation of the plain café into a colorful pub started to take place.

Continuing his intriguing tale, Osawa told me the moment when Junko said suddenly said ‘I love you’. She expressed how much she meant. He didn’t think much of it, but later that morning, she left. He thought she was just taking Yuki to kindergarten, but in reality she just ran away with his son. He never saw them again.

The following five years, Osawa suffered excruciating pain from the heartache of being abandoned by loved ones without reason. It led him to waste all of his savings.

But eventually, when the need arose, he used his pain as inspiration to do something beautiful. In his mid sixties, when he needed to repair some paint on the exterior of the building, suddenly got the urge to paint all his pictures. “I had never learned how to paint—had never painted anything since I started the café. But the portrait turned out well. It had a genuine likeness to him.”

That episode reminded Osawa just how good of a painter he was. He remembered being really good at painting even as a young kid. “I wanted to study art, but my parents told me I couldn’t make money at it, so I stopped. Only years later did I realize that I should never have given it up.”   According to him, he enjoys painting and does not get tired of doing it.

He thinks even if he had pursued the art back when he was younger, he still would never have gotten tired of it, and would still be passionate about it until today. “I don’t plan out what I want to paint next,” shared Osawa. “I paint whatever pops into my head. Painting saved my life. Without it, I might have killed myself.”

The café is loaded with pictures of him with his former lover, as well as paintings of his beloved son, Yuki, on the walls. Up until now, he still is very hopeful that he gets to meet his son at least one last time before he passes. The kanji (Japanese writing that uses Chinese characters) outside of his building says 聖女純子 (せいじょじゅんこ), meaning “Saint Junko”. These words aptly reflect his undying love for his son’s mother.

What is mesmerizing about the Million Dollar Café is how it reflects the life and personality of Osawa. It is a symbol of his love, history, likes and dislikes, and basically, whatever comes to that creative and brilliant mind of his. For instance, he made a painting of a dragon that showed itself to him in a recurring dream he had back in first grade. He would frequently dream about this dragon flapping its massive wings swiftly flying toward him while in a state of sleep paralysis. Remembering this scary childhood nightmare, he decided he wanted to paint the dragon that haunted his sleep many nights ago.

After having painted three dragons, Osawa claimed to have dreamt of what he coined as the “Revelation of God”. In the dream, the very first dragon that he painted transformed itself into a completely different dragon. The dragon kept shedding itself and by its third set of molting, it had turned into God himself. The room that houses the dragon painting was then aptly called by one of his regular customers as the “God Room”.

The café attracts a positive vibe that draws good fortune. In one of the walls, you could see a sign that says, “Thank you to everyone nationwide. By Takeshi.” Osawa painted this sign when volunteers coming from different regions of Japan banded together to repair the Momotarō Shrine, and went to his humble café to celebrate their success.

Osawa is a fan of Hatsune Miku 初音ミク, as well, so you will find a painting of her in the room. He was inspired by a paint job he saw when an otaku (a slang term referring to people who have particular obsessions, specifically on anime and manga) arrived in his cafe in an itasha 痛車 (a car decorated with paintings of anime and manga characters) that had a Hatsune Miku theme. So off he went and painted what he thought Hatsune Miku would actually look like. His interpretation gave the character eyes embedded in colorful circles and had seaweed emerging out of them. Honestly, I found it quite weird, but still interesting! 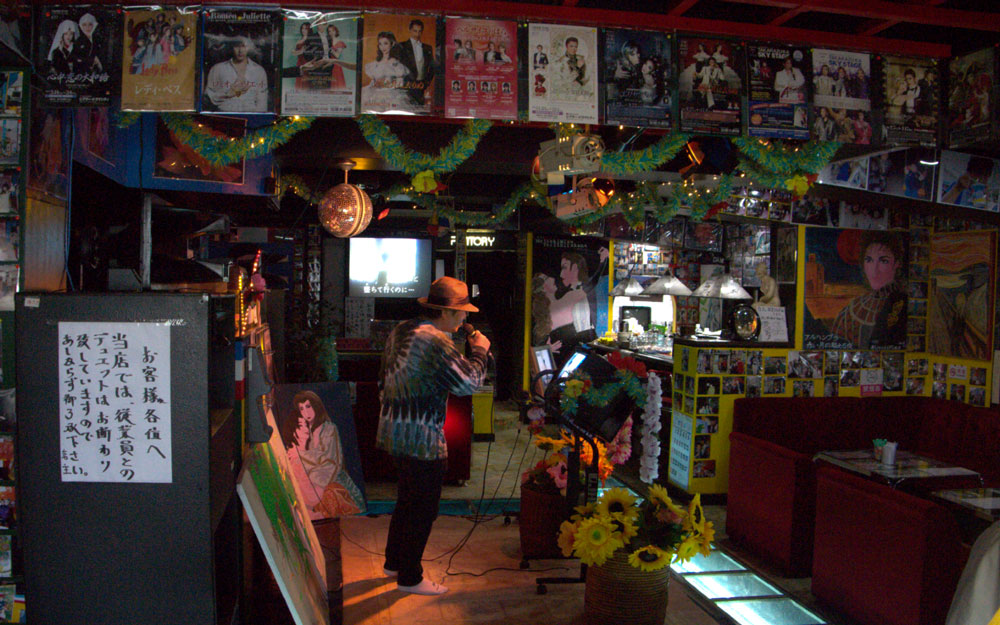 After my extensive discussion with Osawa about his life and his artwork, it was time to place my order. I figured that since I was in Aichi, that I should order their famous Ogura toast — thick-cut bread with sweet red bean filling, toasted to perfection. The cost was ¥500.

Oddly, though, the first thing that arrived on my table was not bread, but a salad. I was weirded out in the beginning, but after learning that it was a free treat from Osawa, I could not help but smile. Such a generous guy, this guy.

As if that was not thoughtful enough, I also got a glass of coke, on the house!   When I finally got my Ogura toast, I was delighted that I had been given so many slices. It also came with hanami dango — a sweet mochi dessert. An absolutely wonderful treat!   The generosity didn’t end there. After devouring the last of my toast, I was given a sundae, once again, on the house.

Apparently, he was not only just doing it for me, because he knew I was going to write about him. He did it to everybody, as well. He was just really a good-natured, generous man, who loved serving his customers great food.

At one point during my delicious breakfast, he asked me if I drank alcohol. “Yes,” I immediately responded. He then gave me a glass of wine, despite the fact that it was only 9:30 AM. According to him, Junko introduced him to drinking wine for breakfast, so it has become a tradition for him to offer the same to his valued guests.

Another quirky thing about the cafe is that, for every order of drink, you get the opportunity to sing one karaoke song, free of charge. When I was there, again, early in the morning, there was already one customer singing! 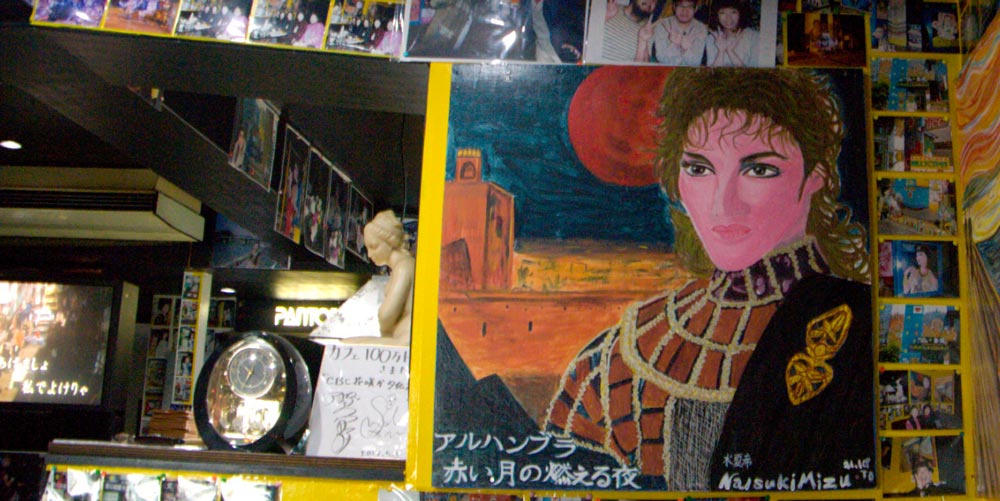 There was a sign that said customers are not allowed to sing with the cafe’s staff, but at one point during my visit, Osawa started singing with his guests! Maybe he was just really in a good mood, but I was really loving the carefree vibe of this place.

When it was finally time to pay my bill, I was surprised to see that after everything I ate, I was only getting charged for ¥500. I know he said everything else I had that I didn’t order was on the house, but still, I expected to be charged more. I insisted to pay them more, but the staff refused to take it. They did not take any tip, either, even though I really wanted to because I truly received wonderful service and overall had a fantastic time.

As I was about to leave the cafe, Osawa approached me, handing me a can of beer as a souvenir. In disbelief, I just had to ask him how he can afford to be so generous and still earn money at the same time.

In response, he uttered, “Profit? I calculated once, but I only found out that I don’t make any profit. So I stopped calculating. I want to make my customers happy, even if I use up all my pension from the government. I’m sending my love to people from here.”

Before heading to Momotarō Shrine, Osawa gave me the honor of painting a little Tofugu on one of his walls. This was only my second time doing it, the first was in Kyoto, in a bar called Rakugaki Tonkatsu, when I was with Tofugu’s illustrator, Aya. How I wished she was with me again at that time, because I badly needed help!