Why Is Bacon So Irresistible

If we could give awards to food the same way we do to people, bacon probably wouldn’t rank very high on the list for good health, however, it just may win the top prize for being a favorite food. Full disclosure first before I go any further – I don’t eat bacon. And this makes me part of the minority.  According to the president and founder of Sensory Spectrum, Gail Vance Civille, bacon is too flawless to describe in words. Sensory Spectrum is a consulting firm that assists companies in learning how sensory signals help consumers view certain products. Civille shares that she has a friend who is actually vegetarian and only eats food for vegetarians EXCEPT for bacon.

Her friend says that bacon tastes so good, hence the deviation from the regular practice of vegetarianism. In a recent study conducted on a variety of foods, bacon ranked in the midrange for foods that were considered to be “addictive”, based on self-reports of the participants.  Linda Papadopoulos, a consumer and sensory research expert and owner of LP & Associates, shares that for her, bacon is the perfect combination of taste, with savory, sweet, smoky, and salty characteristics.

The cured meat gives a savory taste with the browned roasted fat that gives it the perfect combination of elements that goes right to one’s brain and leads you to take another bite. Papadopoulos has managed the sensory evaluation group at Oscar Mayer for 7 years, with part of her role ensuring that the company’s bacon was enjoyable to their consumers on a consistent basis. Another part of what makes bacon so appealing and irresistible is its distinct scent. Papadopoulos says that bacon has this homey, smoky, and savory aroma that can’t help but make you feel good.

There’s also a nostalgic component attached to bacon. According to Andrew Milkowski, for a lot of people, bacon reminds them of some good experiences and memories when they were children, with bacon being considered a staple in most homes. It translates over into the desire to enjoy those experiences for the rest of their lives too. Milkowski was spent 3 decades in Oscar Mayer’s research and development department, where together with Papadopoulos, he helps ensure product consistency and quality in their processing of bacon. 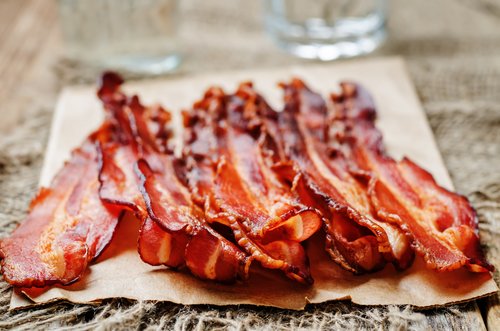 The Complex Flavors of Bacon

Civille said that bacon naturally has a significant amount of salt, a good amount of sugar, and a whole lot of fat. Bacon’s flavor profile includes a complex mix of sweet caramelized tones, sweetness from the maple, and smokiness from the curing process that makes the browned caramelized pork fat and meat meld into something very intricate. The Savory Taste of Bacon is a result of the cured meat interacting with the smokiness as well as the salt content, plus add in the aroma produced when cooking it, which plays a big part in the overall flavor experience when eating bacon, said Milkowski.

How is Bacon Made?

Bacon comes for the belly of the pig. Milkowski, who is also a professor of meat science at the University of Wisconsin, explained that the pig flesh in injected with a solution that contains salt, sugar, water, and a curing mix that includes sodium ascorbate and sodium nitrite. The curing solution gives flavor to the pork and it is left to marinate in the meat for several hours to even a couple of days prior to being moved in a smokehouse. In the smokehouse, smoke is introduced to the bacon while it is being heated.  The warmer the bacon gets in the smokehouse, the faster its flavors also develop. The entire process of smoking the meat can take anywhere from 2-4 hours to as long as 24 hours, depending on the company’s recipe and their idea of what makes quality bacon.

For Papadopoulos, smoking bacon meat can be considered an art, and it’s crucial that you get the right balance of sweetness, saltiness, meatiness, and aroma from the browned fat. After smoking the bacon, the meat is chilled and sliced before being distributed to a store near you. The processing methods that bacon meat goes through gives the flavor derived from the curing solution introduced in the meat as well as the smoking process. However, there’s an additional flavor that it develops when bacon is cooked.

At the expense of sounding contradictory, bacon is very high in fat prior to cooking it, but a lot of that fat is also reduced when fat is rendered in the process of cooking it. Milkowski said that after you are done frying bacon, you usually end up with only 1/3 of what you had to begin with. Most of what is lost during the cooking process is the moisture and fat from the meat. What’s left is a leaner form of protein, a bit of fat, salt, and carbohydrates. Despite losing some of the fat during the cooking process, the fat is what gives us a lot of the flavor profile of bacon.

Experts say that the fat gives way to the release of other flavors, particularly the sweet, caramelized, aromatic notes that are characteristic of bacon. Milkowski shared that when cooking bacon at a high temperature, it results in the fat breaking down, essentially melting from a solid to a liquid state like vegetable oil. When it gets even hotter, the fat reacts with other parts of the food, generating more flavor in the process. Bacon is cooked at a very high temperature and produces different flavors compared to other bigger cuts of meat, which never reach the same high temperature that bacon does when cooking.

For Civille, Oscar Mayer’s bacon bears a very flavorful cure, with a consistent smoky note and sweet aroma, which for her, is the standard expectation of Americans when it comes to bacon. Bacon comes in different flavor variations including maple, chicory, wood smoke, peppered bacon, and applewood, the flavors of which come from the wood used to give bacon its own distinct flavor. Civille said that you can get fancy with the different cure and smoke options for bacon. The thickness of bacon can vary too. If you’re after a crispier and crunchier texture, you can go for the thinner bacon cuts. If you like your bacon meaty and chewy, it’s best to go for the thicker variety. Bacon strips are usually part of the American breakfast, but its marked flavor and consistency make it a great add-on to various recipes too.

Apart from being a side dish, bacon can also be used to increase flavors of scallops or give the sweet and smoky taste to a classic BLT sandwich, alongside the lettuce and tomato. Bacon that is thickly cut can also add a fresh tone to healthy meals. As an example, bacon can be used alongside Brussel sprouts, a vegetable known to have a bitter taste, for some sweetness and saltiness. Civille also added that bacon would complement the texture of Brussel sprouts nicely, with the bacon adding a hint of crunch and crispiness to the mix. Papadopoulos also added that bacon can be used as a topping on a salad, giving it flavor without too much fat.

It’s no secret that eating too much bacon can be bad for your health, but eating bacon as an ingredient or if you can’t resist eating it on its own – just as rarely as possible, can be an acceptable compromise, especially if you consider yourself “addicted” to bacon. Papadopoulos, a dietitian’s daughter, believes that we should focus on eating a balanced diet and look at the positive benefits that food can do to our health, rather than looking at what negative effects it can do to your health. She recalls having bacon occasionally before and she considered it as a treat. The distinct flavor profile, the way it gives flavor, and its crunchy texture has made it comfort food and for her, you definitely need comfort foods like those in your diet.

Mattress Cleaning Tips
Spending money on a mattress is quite an investment. That thing has to support you night after night for probably 5 or so years. If you're going to dish out several hundred dollars..

Whoever Said These Buildings Are Ugly Is Clearly Mistaken
Appreciating the beauty of magnificent architecture of tall towering buildings is not at all difficult to do. While most people find modern buildings with the latest design trends..

7 Simple Meditation Tips For Newbies
Meditation. What a walk in the park! All you do is simply sit in a peaceful spot for hours, completely still, doing nothing. Not even thinking. Easy as pie.  Not exactly. once..